Everything has taken a different turn especially in the world of technology.  Time and space have become so limited basing on the inventions that come in everyday. Qubes Os is simply a special kind of desktop. It works under the concept of security in isolation. This complex device works under two main contradicting goals. One of them is to try and ensure the strong isolation between the domains which are lightweight. This of course is challenging. The next goal is to ensure that the trusted code is minimized and that the isolation is as seamless as it can be. 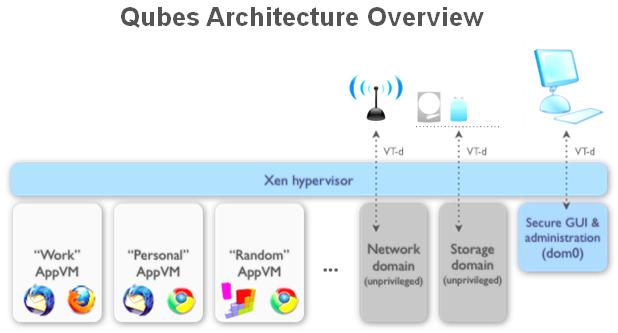 Qubes Os has really advanced and apparently it is more user friendly than any other OS. There are however some limitations that the users can face at the end of the end. One of them is that it lacks the 3D graphics especially for applications which run in AppVMs. This could be so frustrating if the user intends to use this application.

Another limitation is that it does not have ideal hardware compatibility. This is a common problem for most systems made by the Linux systems.  Another problem is that it has an individual operating system and this means that no application can be installed in the already existing user’s OS. There are however some facts that people need to understand about Qubes.

First of all, is not part of a linux distribution. The commonly used template is Fedora 18 which is also used as the default template for the AppVMs. One of the main role of the Os is to provide a seamless clear integration and ensure that all the currently applications running in a number of VMs is combined into a single desktop. There are a number of OSes that can be run in a multiple of domains. They include; ServiceVMs, GUI and AppVMs. This means that a number of specific roles can be performed under this kind of setting at the same time.

The obvious advantage of working with the Qubes codes is that one can be able to work with a lot of isolation providers and basing on the fact that one can be able to switch seamlessly on a number of hypervisors. There is also enough security when one is using different qubes at the same time. Another advantage is the lightness of the entire system since there will be no CPU or any other memory resources. There are so many cases where the need for security has been called for. Especially in meeting place. With the advanced technological systems, it is necessary to have a logical way in which security needs to be administered. In such cases qubes are efficient as they can be able to multitask and carry out the various tasks as commanded by the user.

These desktops are ideal in big organizations which have complex working systems. Security is a major concern in every aspect of life and therefore this operating system has been so beneficial in the recent past. With the virtualization of the OS, much security has been administered and also it creates a room for the redesigning of the OS, which means incase anything has to start from the scratch, then its not going to be a hustle. Microsoft has and is still playing a major role in ensuring ultimate security for the users. Google on the other hand has also turned out to be beneficial though there needs to be amendments here and there in order to increase on the rate of efficiency and security. An efficient browser should have a perfect isolation.

Common Career Mistakes That You Should Avoid Like Plague

Video Playback: I Wanna Be a Human Resources Officer

Understanding the essence of Training and Development for an Organization